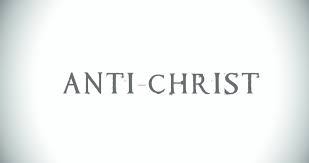 “First off I want to say that this will NOT be a lengthy article considering this word Antichrist is only spoken 5 times in the entire bible.”

Anti (G473) which means: over against, opposite to, before, for, instead of, in place of, and the word

Christos (G5547) which means anointed and is derived from the word chriō (G5548) which means to furnish with necessary powers for administration.

The word here is the same in both cases, not singular.

This verse in Greek properly translated is: antichrists shall come, even now there are many antichrists~

This verse in Greek properly reads THEY ARE antichrists that deny the Father and the Son. Not HE IS. So misleading.

1Jn 4:3 And every spirit that confesseth not that Jesus Christ is come in the flesh is not of God: and this is that spirit of antichrist, whereof ye have heard that it should come; and even now already is it in the world.

This verse in Greek properly reads THE same are THEY that are antichrists, who you heard would come; and are now already in the world.

2Jn 1:7 For many deceivers are entered into the world, who confess not that Jesus Christ is come in the flesh. This is a deceiver and an antichrist.

This verse in Greek properly reads THESE ARE deceivers and antichrists.

This is it folks, no other mention of this word antichrist in the whole bible.

So, any teaching using the word antichrist that goes beyond what is written; is just that; going beyond what is written! There is NO MENTION at all of this word antichrist in the book of Revelation. In FACT if there IS supposed to be one that is referred to as THE ANTICHRIST wouldn’t his final judgment be shown in the book of Revelation? The Beast, The False Prophet and the Dragon/Devil all get thrown into the lake of fire in Rev 19:20 and in Rev 20:10 but no mention at all of this character the modern church has taught us to be keeping watch for.

2Th 2:3-4 Let no man deceive you by any means: for that day shall not come, except there come a falling away first, and that man of sin be revealed, the son of perdition; Who opposeth and exalteth himself above all that is called God, or that is worshipped; so that he as God sitteth in the *temple of God, shewing himself that he is God.

This word temple here is the Greek word Naos (G3485), and it is used exclusively to represent the most holy place or the body of Christ. The word used when describing the physical temple building is the word hieron (G2411) Naos is the word Jesus used when He said tear down this temple and I will rebuild it again it 3 days.

This phrase “man of sin” is used only one time in the New Testament.

The bible verse 2 Th 2:8  And then shall that Wicked be revealed, whom the Lord shall consume with the spirit of His mouth, and shall destroy with the brightness of His coming:

*This one is real misleading. It properly translated in Greek says “the wicked” NOT “that wicked” and the capitalizing of Wicked is particularly misleading.

This is as much scripture that I can produce that the enemy could use to twist people into thinking a certain man is going to be popping on the scene that will fill this fictitious role of The Antichrist.

~but the False Prophet is predicted, and we need to pull our heads out of fictional books and the spun doctrines of men and get back into the Word of God so we can know exactly what to be looking for~

The False Prophet will HAVE to be a Religious Leader, otherwise he could not be called False Prophet. The word in Greek is pseudoprophētēs (G5578) and it means: one who, acting the part of a divinely inspired prophet, utters falsehoods under the name of divine prophecies.

In the book of Revelation there is no mention whatsoever of a character referred to as The Antichrist. We see in chapters 16, 19 and 20 the Beast, the False Prophet and the Devil.

In Revelation 19:20 and 20:10 we see the main characters receiving their final judgment but no mention of the Antichrist receiving judgment.

Rev 19:20  And the beast was taken, and with him the false prophet that wrought miracles before him, with which he deceived them that had received the mark of the beast, and them that worshipped his image. These both were cast alive into a lake of fire burning with brimstone.

Rev 20:10  And the devil that deceived them was cast into the lake of fire and brimstone, where the beast and the false prophet are, and shall be tormented day and night for ever and ever.

I pray with all my heart that this article has you thinking, and the desire to search these things out would lead you to an even greater knowledge of the Truth of God!